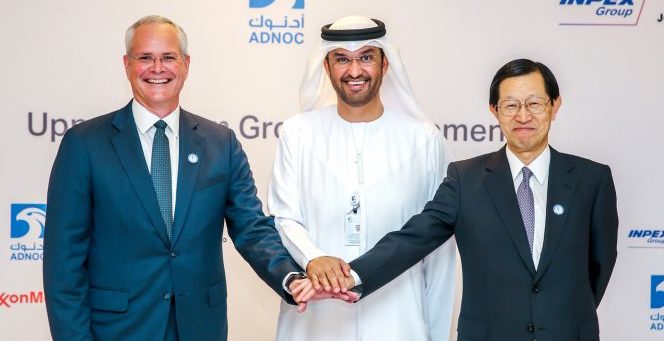 H.E. Dr. Al Jaber said: “ExxonMobil and INPEX, alongside our other partners, have played an important role in the development of our oil and gas assets. This agreement is another milestone in our efforts to forge partnerships that bring technology, expertise and capital aimed at delivering greater economic value and levels of recovery from our resources.

“As we continue our transformation into a more commercially driven and performance led oil and gas company, we are focused on securing partnerships to allow us to unlock and maximize value and secure market access. In the upstream, we are adapting to the evolving market environment by driving down production costs and increasing our crude oil production capacity. We are also focusing on the application of value add and innovative technologies and are leveraging big data to drive efficiencies and optimize production.”

The Upper Zakum oil field, located offshore Abu Dhabi, is the second largest offshore oil field and the fourth largest oil field in the world. Oil was first discovered in 1963 and ADNOC took the decision, at its own risk, to develop the field, in 1977. Subsequently, in 1978, JODCO, a wholly-owned INPEX subsidiary, partnered with ADNOC in developing the field, followed by Exxon, in 2006. In the same year, the Upper Zakum joint venture partners began studying options to increase production capacity from 500,000 barrels per day to 750,000 barrels per day, eventually pursuing the plan to use an innovative artificial island-based development combined with extended-reach drilling technology to increase recovery and minimize infrastructure.

“This agreement represents a new milestone for Abu Dhabi’s oil production and demonstrates ExxonMobil’s long-term commitment and partnership with the UAE,” Woods said. “We look forward to continuing our successful efforts to increase production capacity from Upper Zakum. By leveraging the strengths of the Upper Zakum joint venture partners, we are able to maximize the value of available resources.”

Kitamura said: “This outcome, in part, is a testament to the unwavering long-term partnership that INPEX has built and maintained with Abu Dhabi, as well as INPEX’s commitment to the development of the Upper Zakum oil field since 1978. I am confident this plan will contribute to the energy security of Japan and prove to be beneficial for all stakeholders for many years to come.”

The megaproject involved the construction of four artificial islands in shallow water to create what is effectively an onshore environment in the offshore field. Unlike the initial Upper Zakum development, which comprises around 450 wells and more than 90 platforms, the islands provide a large enough footprint to accommodate drilling rigs and house drilling and production equipment and personnel centrally in offices and living quarters, at lower cost and with enhanced safety and comfort for workers. The ongoing costs associated with platform jacket maintenance and satellites are eliminated.

The development will continue to use extended-reach drilling and completion technologies that have proven effective in increasing offshore production.

The development will also utilize state-of-the-art reservoir characterization and modelling techniques, as well as modularly expanding existing infrastructure and facilities to maximize capital efficiency and lower costs. ADNOC and its partners have applied uncertainty modelling in the development of the Upper Zakum offshore oil fields, in challenging carbonate geological conditions, to prepare the ground for optimal value creation in the long term.

In recent years, the Upper Zakum development has set several drilling records in the UAE, including the longest well at 35,800 feet measured depth.