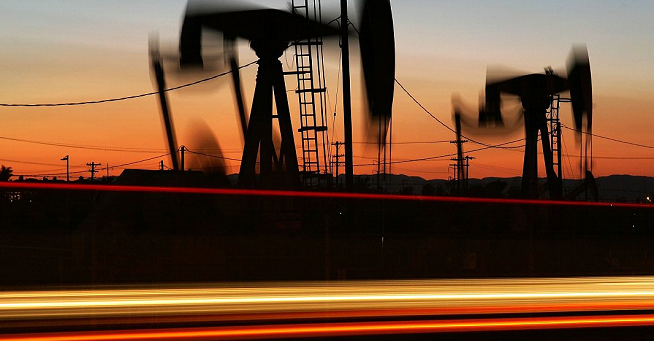 GOLDMAN SACHS: Another oil glut is coming in 2018

Oil prices are heading down again on swelling U.S. crude oil inventories, with Brent dropping below $50 per barrel for the first time this year.
The OPEC deal that has taken more than 1 million barrels per day of oil off the market has not succeeded in reversing this bearish trend for inventories. And with the deal at its midway point, focus is shifting towards an extension of the cuts through the end of the year.
But OPEC’s usual strategy of jawboning the market back up ahead of these negotiations seems to be wearing thin amid record high crude oil inventories. “OPEC has used up most of its arsenal of verbal weapons to support the market. One hundred percent compliance by all is the only tool they have left and on that account they are struggling,” said Ole Hansen, head of commodity strategy at Saxo Bank.
“OPEC’s market intervention has not yet resulted in significant visible inventory drawdowns, and the financial markets have lost patience,” investment bank Jefferies said in a research note.
Although projections from Wall Street banks tend to vary quite a bit, there is a growing chorus warning about another slide in crude prices. At this point, the big variable is whether or not OPEC decides to extend the deal when it meets in May – an extension would likely stabilize prices and might even push them back up into the mid-$50s or higher. No extension and oil could fall much further into the $40s.
Looking out a bit further, things get much more complicated. Even if the supply/demand imbalance is taking a long time to correct itself, rising demand and tepid supply growth suggest that the glut will ease over time. At least that is the general consensus.
However, Goldman Sachs warns that another downturn could come over the next three years, sparked by a new wave of supply stemming from megaprojects planned years ago. These projects cost billions of dollars and take many years to bring online, and many of them were initiated back when oil prices traded at $100 per barrel.
“2017-19 is likely to see the largest increase in mega projects production in history, as the record 2011-13 capex commitment yields fruit,” Goldman said in a note. “This long-lead-time wave of projects and a short-cycle revival, led by U.S. shales, could create a material oversupply in 2018-19.”
Goldman identified a handful of projects in Brazil, Russia, Canada and the Gulf of Mexico that will reach completion and add to global supply between 2017 and 2019. Combined with new shale output, these projects could add another 1 million barrels per day next year.
The investment bank also warned that the markets have become overly optimistic on oil prices since the OPEC deal was announced nearly four months ago. It’s not hard to see why. OPEC’s production cuts in November ushered in several months of unusual stability in prices, ended a three-year run of spectacular volatility. It also sparked widespread confidence in a price floor – with the cuts coming, oil prices likely wouldn’t fall much in the near run, market analysts concluded, and over the longer-term, they would slowly move up towards $60 per barrel.
As a result, U.S. credit markets warmed up to new drilling again, and not surprisingly, spending and drilling activity are already on the rise. But Goldman says that shale output could come in higher than expected this year, disappointing those expecting higher prices.
Most European integrated companies are using a working assumption for their budgets that oil prices will average $60 per barrel in 2017, with an upper end bound of $80 per barrel between 2018 and 2020. That stands in sharp contrast to Goldman’s projections of oversupply for the next three years.
In short, we have a situation in which shale output is surging too quickly, before OPEC has had the chance to balance the market. On top of that, production from yesteryear’s megaprojects will soon come online, exacerbating the glut. The only thing that will prevent another downturn in prices would be an extension of the OPEC cuts, but as Goldman points out, the group has to “weigh the relative benefit of stability (extend the cut) vs. the risk of long-term share loss.”
OPEC has been burned before when it tried to cut back, losing market share without a corresponding increase in prices. So far in 2017, the same thing is occurring. That might make OPEC members think twice about continuing to shoulder the burden for the global market, ceding market share to shale companies already on a spending spree. It’s not clear how this will shake out, but it’s safe to say that, at this point, there is more danger on the downside for oil prices than on the upside.